Last night I sat in on a pre-gig rehersal for a friend’s band, Static Vendetta. Considering that my own band isn’t exactly in the best shape it’s ever been in, watching Static Vendetta practice is elightening. 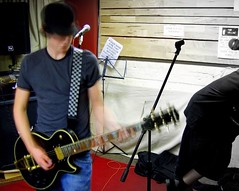 To start with, they play as a definate unit. The band is led by the drums, which are imaginative, varied, powerful, and – critically – consistant. The band takes their timing from the drums – this is the way that it should be. In The Lowlifes, songs have a tendency to rely on either me or Elliot for timings as we use an electric kit (it’s all we can fit in the attic), and they’re quiet.

The guitar riffs are essentially simple, but have impact. Songs in The Lowlifes are often guitar-based as – let’s face it – vocals aren’t our strong point. Static Vendetta songs are punchy; most of ours aren’t. 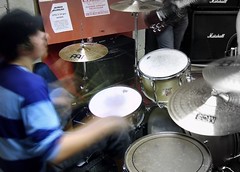 The vocals are excellent. Thoughtful lyrics are well sung, with tasteful use of growling, singing, and backing vocals. We need a lyricist.

This isn’t intended to be a mardy post – simply an observation of what makes a good band. If you’re in a fledgling band, you would do well to take note of how SV have succeeded where we have failed. A quick summary:

Static Vendetta performed last night at The Victoria Inn (aka the infamous ‘Vic’). If (like me) you managed to miss them, they should be performing some time in November, and then again with The Lowlifes on December 1.

Hope to see you there 🙂