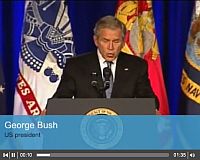 5 years after the initial invasion of Iraq, the Guardian has an interesting video and article on ‘an uncompromising speech’ by George Bush regarding the event.

In the video, Bush says:

“Five years into this battle, there is an understandable debate over whether the war was worth fighting, whether the fight is worth winning, and whether we can win it,” he said. “The answers are clear to me: removing Saddam Hussein from power was the right decision – and this is a fight Americans must win. Because we acted, the world is better and the United States of America is safer.”

He then goes on to say:

Which is great, but I can’t help but wonder: in which middle-eastern country the war will continue?

The war in Iraq was about large bombs. When it transpired that, actually, there weren’t any, it became the war against al-Qaida. Now its more generically ‘The War Against Terror”, which conveniently can never be won as you can’t fight battles against fear and emotion. The terrorists will be replaced by freedom fighter ‘terrorists’ at war with our ‘good guy’ permanent bases established in Iraq. Meanwhile the US government will continue to ‘fight the good fight’ against other ‘evil’ far-away lands whilst unifying and numbing its patriotic citizens and systematically removing their rights via such chestnuts as the ‘Uniting and Strengthening America by Providing Appropriate Tools Required to Intercept and Obstruct Terrorism’ (USA PATRIOT) Act of 2001.

It would not be constructive of the USA to return to peace after Iraq, as it would bring into question the fairly recent legalization of the USA spying on its own citizens and unifying them over a common effort over which they ultimately have no control, and allow its citizens to concentrate on problems back home.

So, where next? Iran? Syria?

Edit:  Oh, and here’s a nice story following the Guardian article on how the USA has made the world a safer place 🙂