I take my camera pretty much everywhere with me. It sounds a pretty clichÃ©d – and perhaps to some people, sad – thing to say, but unlike a large number of people who like to label themselves as photographers and liberate their little silver boxes from their dusty cases perhaps once a month, I do actually tend to have a camera with me wherever I am. I discovered a drawback to this a few days ago. 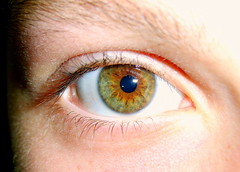 I take my Digimax v800 to school with me every day. This serves two purposes – to allow me to take opportunistic photos of anything that might crop up at school (many of my eye photos – such as the one to the right – are taken this way), and also to facilitate after-school photo excursions if the mood should take me (which it often does).

Whilst taking some pictures around Derby’s Assembly Rooms with my bassist, Joe, we were noticed by a group of sprightly young chavs, half of which were eying up my camera and all of which had that delightful ‘breathe too loudly and I’ll mash you to a pulp to show how hard I am’ look that is characteristic of chav subculture. All of them started towards us.

If you’ve ever been approached by a gang of chavs, you will know just how small they can make you feel. They’re rude, obnoxious, self-righteous, and – above all else – aggressive. Having the aforementioned traits is bearable, but a chav that either:

… is bad news. Unfortunately for us, said gang of chavs exhibited all of the above. Half of them wanted my camera, and the rest wanted fags of Joe. Joe was slightly behind me as I walked, and as the chavs passed us in this basically deserted path stopped Joe and abused him from perhaps 3cms from his nose.

What could I do at this point? I can see three options:

I had to appreciate the fact that, with Joe having long hair and both of us being into rock music, the chances of one person standing up to a gang of 6 or 7 chavs and not spending the night trying to sooth a broken nose and several very painful cuts and bruises and losing all of their possessions worth stealing is slim to none. However, I also had to appreciate that I was carrying a mobile, my house keys, Â£20 in cash and a brand new camera that at least 3 o the chavs had seen.

What would you do?

I chose option 1, which backfired slightly as two of the chavs shouted something to the effect of ‘come the fuck back here or I’ll fucking stab you’ and started to run after me.Â  Luckily I managed to get to the square and rally a few people to help Joe before the delightful pair of charvers caught up.Â  Joe ended up fine after the chavs realized that he in fact did not smoke or have anything sellable on him, and I got away unharmed (albeit with the promise to Joe that if any of them saw [me] again, then [I] would get happyslapped for being a pussy).

Did I choose right?