Last Monday was the one year anniversary of Rhianna Page’s death.  Rhi was a student at Landau Forte College in the year above me.  I knew her from hanging around with her in a group of mutual friends at the square, walking back home through Morley with her, and her supporting The Lowlifes before we quietly faded into the background.

I’m not going to pretend that she was my best mate, that I think about her every day, or that I presume to know what she’d want people to do now she’s gone, because frankly I think all those things are an insult to her memory… although clearly she touched the lives of many people.  What I will say is that she was an immensely likable, gentle but fun girl of wholesome character, without whom the world is a slightly darker place.

I’ve understandably received a fairly large number of hits to my memorial post to her.  Looking back, in honesty the post was a bit camp.  Since then, someone whose name I forget approached me asking for permission to use one of my photos in a video commemorating Rhi’s memory.  I think she did a much better job of it than I.

I don’t think that my picture was used.  It was probably for the best.  It’s quite saddening that the only picture that I’ll ever take of Rhi is one in which she inexplicably has a tree growing out of her head. 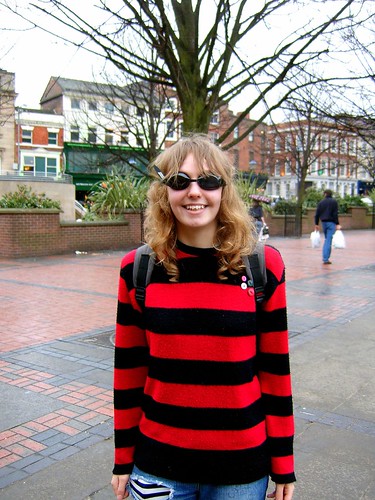 Just one of those things, I guess.

If you’ve found this post because you’re looking for details of Rhi’s commemorative party this year, then don’t worry, you didn’t miss it, the one on Monday was cancelled for fear of bad weather.  It’s been rearranged for Friday, 12PM, Darley Park, opposite the swings.  Sadly it looks like the weather will be even worse on Friday.  Meh, we’ll work something out.  Alternatively if you’re looking for her MySpace page, then it’s not here, it’s here.