If you’re from around Derby, or are especially into photography and live in England, you may have heard of the FORMAT festival.  It is a supposedly annual photography festival, based in Derby, England.  It took it break last year whilst the organizers had new premises built, but it’s back this year and it is the biggest yet.

I’ve been doing some stuff with QUAD, the festival’s organizers, for the past year or so.  As part of this I’ve been asked to contribute towards an exhibit in Derby Museum and Art Gallery during QUAD.  I’m working with a group of four, and together we have chosen the FORMAT 09 theme of ‘tension and suspense’ and have based our pieces around the sub-theme of masks.  Each photographer is creating a series of three images.  Here is an in-progress version of the final frame of my piece. 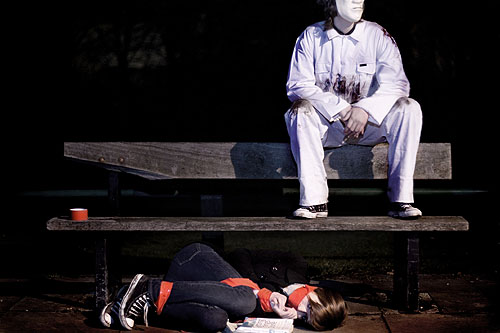 I uploaded it here because I wanted to gauge perceptions before I went further.  I showed this to the youth officer at QUAD and she was pretty disturbed by it.  I’m guessing the vibe that people get from this is going to be fairly varied according to the viewers’ attitudes and life-experiences.

This frame is actually a composite of two separate images.  Yes, Nat really is bound with duct-tape and stuck under a park bench. I took shots of Nat in multiple positions under the bench, and Phil in various positions on and around the bench.  This gave me a wide choice of positions to choose from for the final images.  Obviously this means that the shot above is actually a composite of two separate shots.  This is actually an easier process than trying to get both subjects to pose perfectly for the same picture, but did throw up some problems.

Firstly, although I shot this with the camera on a tripod with a remote shutter release, the flash – which was being held high above the camera on a coiled cord – pulled the camera in such a way that the images were slightly misaligned.  Much harder to fix was the differences in white balance, due to me forgetting to set manual white balance settings, and harder still was the variable output of the flash, which I had also forgot to set to manual.

But anyway, let me know what you think.